Why have I chosen EM?

Modelling at 4mm to the foot was my first choice for this project and that was based on my opinion of it providing the best compromise between detail, the space at my disposal and what I actually want to achieve. Having decided on the scale, the next choice was which track standard to apply. There are lots of different things to consider when making that choice and the answers will be different for everybody. Personally, I enjoy building  / making things the most, very closely followed by taking said things and running them in the company of friends.

Everything else is of secondary importance to those two objectives and if I'm honest, its the latter of those which was the driver for my choice, when I look at how I spend my free time, what I read about and who I talk / socialise with etc, I am exposed to more EM than I am 00 or P4.

I can see definite advantages in modelling with 00, particularly if one can have the layout / diorama with the rail close to eye level and the view largely perpendicular to the track orientation - PMP has shown this off (and many other things) to a great extent with Albion Yard.

The need to not re-wheel stock is a huge advantage, particularly if you are modelling steam. My options are a bit limited in display terms though and I also want to take head on photographs - it is those type of views that highlight both the narrow gauge and larger flangeways of 00. I suppose one could also consider 00-Fine which has the same flangeways as EM but I believe it comes at the expense of a slight narrowing of the gauge to accommodate this. One also wonders at that point whether its then worth fitting wheels to an EM profile to improve the looks...

I did mention flangeways then, and having clocked that the flangeways on the real life railway were narrower than the actual railhead, its something I notice all the time. Some people are skilled enough to be able to hide any conceit in that area, or draw attention away from it with extremely well crafted scenes, me, I am prepared to accept the compromise of having flangeway and railhead close in size and thus sit neatly between the 00 and P4 options.

I do have some experience of the EM scene, I converted a Warship many moons ago (during one of my yo-yo periods of EMGS membership) and last year, with some encouragement from Geoff Forster (Llangunllo), I converted a Bachmann Pannier. Both have racked up some mileage on Neil Rushby's Morfa so I have some confidence that I will at least be able to get stuff up and running...

This is the Bachmann Warship, re-wheeled with Alan Gibson products, scratchbuilt steps under the buffer guides and some heavy weathering. 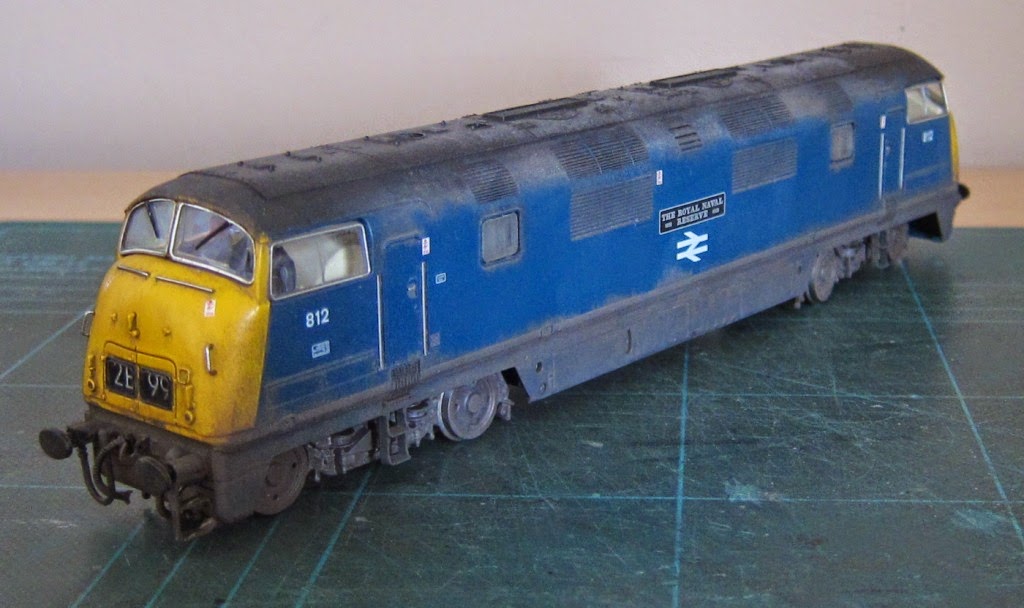 The cab interiors could do with some toning down and a light covering of muck up the sides won't go amiss either. The Pannier has just been re-wheeled using Gibson products again with the new components weathered to match the factory finish, it is shown here running over the bridge on Morfa and pulling some of Neil's stock.

Whilst neither of those two engines represent anything that actually ran on the CVLR, they will both prove useful in terms of validating my track construction and establishing the constraints of couplings, uncoupling magnet position etc. They also have given me the confidence for my chosen modelling period in that I should be capable of tackling the 14xx's and diesels I'd like to use.
Posted by Steve at 14:44